Lamont, California is a small city north of Los Angeles, located on the south-east side of the 99 highway and about 10 minutes north to downtown Bakersfield.

The city of Lamont started growing in the early 1900’s. 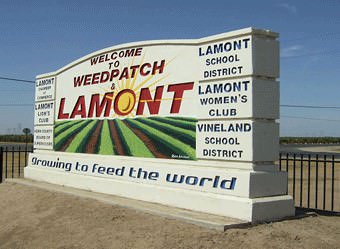 Before the growth of Lamont, Weedpatch was the landmark name in the early 1930’s for farmers and business developers because of the abundant native plants that were grown in that area. Due to the agricultural land, farm workers were steadily migrating to the city in the 1930’s. When the population increased, new construction for buildings and residential homes increased.

If you plan on visiting Lamont and its neighboring community of Weedpatch, you’ll see a decorative welcome sign located off the side of highway 184. That sign embossed with bold red lettering and depicting an agricultural field of crops in rich greenery, was created by three innovative artists, Heather Connelly, Jo Cacombe and Jayne Murray, from England in 2007.  They created the sign to represent the city’s history.

If you’re interested in looking for a home, a business or land, call one of our professional and knowledgeable real estate agents today.